On a very wet and windy Wednesday, November 2, design duo MinaLima returned from their mini North American tour to the House of MinaLima in London to celebrate the release of their new book, The Magic of MinaLima: Celebrating the Graphic Design Studio Behind the Harry Potter and Fantastic Beasts Movies.

Approaching the House of MinaLima on Wardour Street, it was clear that the team was already preparing for the holidays. The window was dressed to proudly display The magic of MinaLima and pay homage to the creations of the wizarding world with a festive touch. With balls, garlands, pretty lights and a giant book cover, the showcase had it all.

Upon entering the house, I headed straight for the gallery space to view the illustrated classics, wizarding world designs, and more Christmas decor. Snow White and Other Grimm Tales is the next issue in the design house’s Illustrated Classic series, so, of course, a large cover print was waiting to greet people as they walked down the Covered by the Daily Prophet stairs. 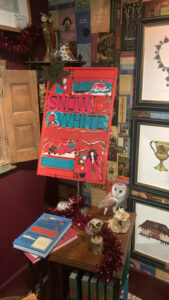 But tonight was all about The magic of MinaLima and celebrate the design duo’s two decades in the wizarding world. The magic of MinaLima explores 20 years of work from the graphic design house, from Harry’s letter of acceptance to Hogwarts to recent work from the fantastic beasts series. Along with photos, images and carefully told anecdotes, the book provides insight into the design process through MinaLima’s signature interactive elements.

Many models featured in the book can be viewed in House of MinaLima. The gallery walls feature textbook covers, butterbeer labels and crests. Of course, fan favorites like the Black Family Tapestry, Wanted Posters and the Marauder’s Map take pride of place in the gallery and pages of The magic of MinaLima.

But there’s more to the book than just drawings, and Miraphora Mina and Eduardo Lima were on hand to tell us more about some of the duo’s personal photographs that appear throughout its pages. In particular, they highlighted two childhood photos on the inside cover of the book of five-year-old Mira and five-year-old Eduardo. While joking that they both sported similar haircuts, they pointed out that the photos show them both drawing, a passion that set them on the path to where they are today.

After discussing their plans for the future, near and far, such as the publication of Harry Potter and the Prisoner of Azkaban next year and the possibility of a MinaLima original story, it was time to explore the design work and hidden gems upstairs in the shop. 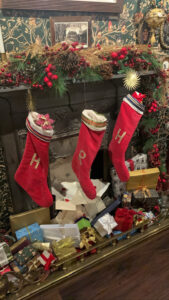 In and among the items for sale are original Miraphora sketches of magical creatures such as the Niffler and Bowtruckle. Throughout the store, photos celebrate the magic of MinaLima and its 21-year history. These photos show all their fond memories. Including trips to Orlando, meeting fans and attending conventions.

After searching for the hidden treasures of House of MinaLima, including many owl figures scattered throughout the gallery and shop, the night came to an end. I can’t wait to discover the pearls they have hidden in the book.

The magic of MinaLima is available for purchase now. Copies purchased from the MinaLima website or House of MinaLima cost £40 and include a bookplate signed by Eduardo and Miraphora.

Did you know that MuggleNet is 99% run by volunteers? With your monthly commitment of $5, you can provide financial support to our volunteers while becoming eligible for exclusive gifts!

Support us on Patreon