As AniManGaki 2022 took place last weekend, the people there were generous enough to allow me to sit with some of the guests, including Indra”RandoWis“Audi, a Singaporean webcomic artist who has garnered 280,000 Facebook followers, 160,000 Twitter followers, 150,000 YouTube followers and 140,000 Instagram followers.

RandoWis is best known for its animations and weekly four-panel comics, but it also has an ongoing series called “We Live In An MMO?!”. AniManGaki was also his first public appearance, so it was a good opportunity to let RandoWis share a bit about himself, his experiences and series, and how he got into this space.

This is your first public appearance, how has it been so far?

It’s beautiful, it’s awesome, I walked into it with no expectations, and yet I’m still blown away by the welcome and kindness that was shared. It’s amazing so far and I really didn’t expect it to be like this, it’s beautiful and wonderful. The energy is awesome, the crew is awesome and the other guests are wonderful. I’m having a hell of a time.

For people who may not know you and your content or fans who may be new, RandoWis is short for “Random Wisdom”, do you mind sharing the meaning of your name and how you did you find it?

Before being known as RandoWis, the name I gave to my comic book series was Random Wisdom. The series was originally posted on a private Facebook group with myself and my group of animation school classmates. At the time, I just called them “Random Comics”, and in it, I made fun of my friends and teachers.

I felt the name “Random Comics” was too short a name, so I thought of a word that would rhyme with Random, and stuck with Wisdom, so it became Random Wisdom. It doesn’t really matter, but when I started publishing my comics publicly, I thought Random Wisdom was too long, so I shortened it to RandoWis.

What did your classmates think of your comics at the time?

At the time, they thought it was funny because I made fun of everyone in the class, including the teachers we didn’t like. They would get really happy when featured in this week’s edition of the comic. But after a while they thought I was being held back by only posting it on the Facebook group. They believed it might be something if it was public. So I took this leap of faith because of their faith.

Can you tell us a bit more about yourself and how you got into illustration?

Ha! Where do I start? I’ve been drawing for as long as I can remember, even as a child I remember my mother putting me in a drawing preschool – I think she just wanted to get rid of me from the house. So I spent most of my time drawing.

I remember I wasn’t good at it but I remember having a lot of fun and I kept that habit at home and so for a long time I just drew things that had the looks really bad.

After high school, when I had to choose where to go for grad school, I felt like I really wanted to do digital animation – just something that had to do with drawing – and one that really got me called was digital animation, so I went for a degree in it. From there, it solidified my interest in drawing, illustrating, animating and making videos.

I remember it was like a pivotal moment when I had to choose what to study for my graduate studies.

Where do you draw your design influences from?

Anything that looks good or that I find interesting. It doesn’t have to be media, sometimes I just look at the clouds and an idea pops up. The music is also good. The music sometimes helps me to fantasize about certain scenarios and then I say to myself “Oh that would go well in a comic strip”.

Especially in the “We live in an MMO?!” comic, I usually try to draw inspiration from as many sources as possible, like anything, reading, music, and sometimes just walking around listening to nature. I guess that helps the fantasy side of things. 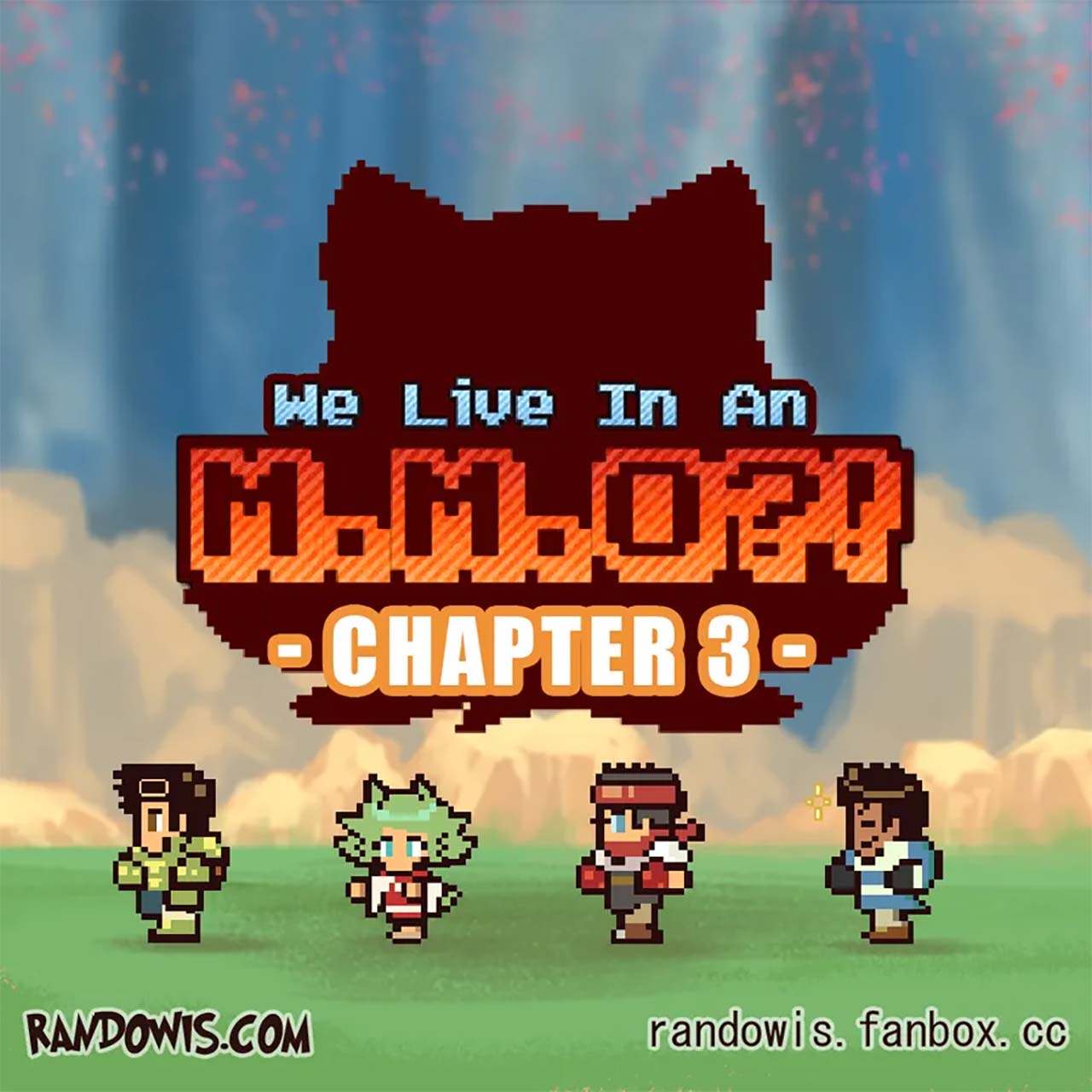 If you’re talking about the weekly comics, these are normally based on real events with a bit of exaggeration just to make it funnier.

Would you say you see illustration more as a job or do you still consider it a hobby?

It’s my personal principle to draw because it’s fun to keep work fun. Because it sucks sometimes. Sometimes the process becomes really overwhelming because there is so much to do. And then you have your personal issues like “maybe I’m slow”, “maybe I’m not good with color”, or “maybe I’m not good with proportions”. You run into all these obstacles, and if you start to hate work in general, you’re probably not going to last very long. So it’s one of my personal principles to make sure that “as long as it’s fun, it’ll be worth it in the end”, even if it’s hard now.

So would I say it’s work, yes it’s definitely a chore but it can also be fun.

How often would you say you encounter creative blocks and what do you do when they occur?

I’ve actually been going through a creative block for two years, and the reason is because of a lifestyle change because my friends aren’t so free anymore, some of them have left the country, some of them are even founding families by leaving me alone, still at home looking at the same walls and the same people.

Because of this lifestyle change, inspiration doesn’t come the same way, because things aren’t the same. So for me, when you come across an art block, I would say try to live a little differently. Maybe if you’re not going out as much, go out more. Maybe if you don’t go far, then maybe you should go far, instead of going to the same old places. If you don’t read as much, maybe read more. There’s inspiration to be found in a lot of places, so if you run out of a source, there are always other alternatives you can try, so that’s what I’m doing now. I tried to read more, I tried to listen to podcasts, audiobooks, just to find new inspiration for comics, illustrations, whatever, and animation too.

What does the process of creating your comics look like, both for your weekly comics and your “We Live In An MMO?!” series?

Normally this involves first writing down the idea on a sheet of paper. If it’s for short comics, it’s whether or not I can get the punchline in all four panels, which can sometimes be very difficult because sometimes you lose the joke when you cut the context too much. So that’s the thought process for short comics, but for MMO comics, I usually write the 20-30 pages on a piece of paper first, just to see if the visual storytelling flow or the areas of text adapt to certain domains.

I’m self-taught when it comes to making a comic series, so whatever I do, I learn by watching other manga and comics I read. So I try to reproduce what I think is good, on a piece of paper as a draft first, then I go from the paper draft to the digital draft, which sometimes forces me to go back because once it is in a digital draft, it’s a lot bigger and the page proportions look different. Sometimes you need to expand or shrink certain things, sometimes you might need a two page panel because you need that impact.

So there’s paper draft, digital draft, then outlines, base colors, backgrounds, then lights and shadows, followed by special effects, then text.

Have you ever worried that your comic book jokes won’t land or that readers won’t understand the humor?

I try not to think too much about how people will like or hate the joke. If it’s funny and it’s with good intentions, I’ll just throw it out there. Because for me, I believe we can’t decide what gets popular and what gets funny because everyone has a different sense of humor. For me, the most important thing is whether it’s funny or not for me. Like if I watch it next week or even next year, will I still get a good laugh out of it? Was it fun doing this comic? And if the answer is yes, then here we go and I’ll let people decide if they like it or not or if they want to share it.

Since you touched on the subject of manga earlier, are there any manga that you personally like or recommend?

For the action, I recommend One Punch Man, because I closely observe the way the action is drawn in One Punch Man and it has a lot of “impact”, so I try to refer as hard as possible to the action scenes in “We Live in an MMO?!”. Nichijou in general is good at punchlines and comedy.

What about your personal favorite manga?

I don’t really have a favorite manga, I just read what I find interesting. So far Chainsaw Man is good – I read it all in one sitting. My favorite character has to be Makima.