The team sought to create cohesion between the effects and the different artistic styles. Ikeuchi explained how “ideas were taken from both themes and mixed together”.

Create “possibilities” in the world of a game

Prior to the release of Super Mario Odyssey, we made a trailer for the game where Mario jumped out of a manhole and ran around a town resembling CG New York. The concept for the video was to have an animated Mario contrasted with a gritty, realistic cityscape. As the effects designer on the project, this posed many challenges for me.

When Mario runs in Super Mario Odyssey, a small white cloud of smoke appears below him. My senior colleagues often say “effects are like glue” which also holds things together when game elements interact with each other. When Mario throws his hat and hits an enemy, things like stars appear to visually let you know you’ve hit the target.

When Mario interacted with the “real” world, the big problem was choosing which of the two art styles the visual effects should look like. Should we choose an effect that resembles the animated Mario? If so, it wouldn’t fit the realistic city, and the same could be said for the reverse. To solve this problem, ideas were taken from both themes and mixed together.

When the screen takes over 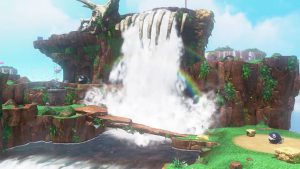 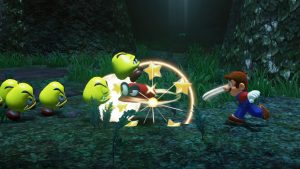 Take for example a waterfall in the middle of the wilderness, which has a realistic splash effect. But when Mario hits something, cute stars appear instead. We didn’t want all characters in the game to have the same effects. If a dragon breathes fire, the fire becomes more realistic the farther it gets from Mario, and we kept this design choice in mind when creating all effects throughout all stages of the game.

Effect design may seem simple compared to character design, but technology allows for more unique expression. Implementing technology, however, is not something a designer can do alone. You need help from programmers to help you apply the ever-changing technology to effects, and we’ve had plenty of help with that in Super Mario Odyssey. 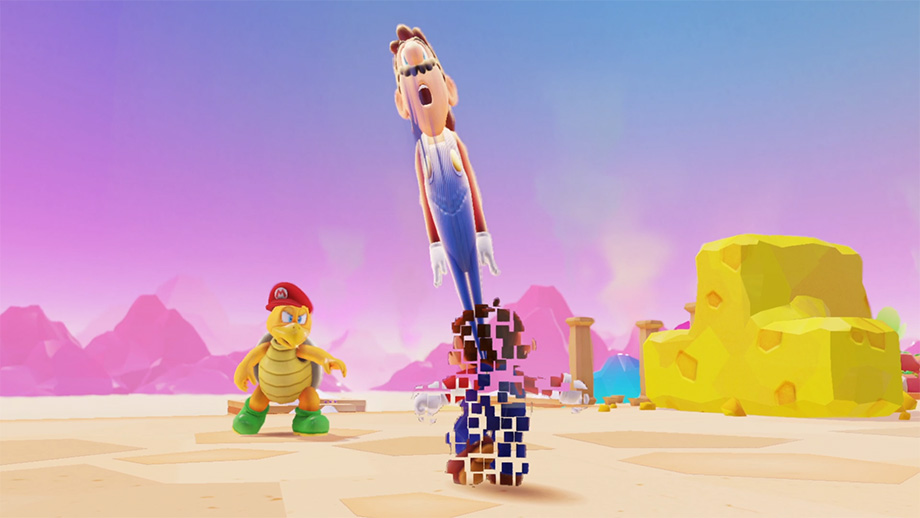 An example of this is the disintegration effect when Mario captures an enemy. It was a joint effort with programmers and is an example of how technology can be used successfully.

One of the best things about this job is that we can add a single effect to let what’s happening on screen take center stage. In a forest step, adding mist creates a more natural look. Or if from the outside you see an image of a cherry blossom tree – that’s beautiful in itself, but what if you add a wind effect to it? The context of the image changes and it represents the progression of time. Effects not only glue things in the game together, but they are something that adds to the world. The job of the effects designer is not just to create effects, but to make the game more “real”.

Super Mario Odyssey was originally released on Switch in October 2017.

Many thanks to centurionnugget and Jarop for contributing to this post.